No, that’s not a typo. We are a group of like-minded individuals who are driven by the twin muses of rock and roll and video games to create a concert/audience participation experience that’s quite unlike anything you’ve ever experienced.

Many of you will have seen or played the games “Guitar Hero” or “Rock Band”. For those who haven’t, here’s a brief explanation: these games are designed to simulate rock and roll stardom via the means of plastic guitars, drums, and microphones. Player/rockers press buttons in rhythm with scrolling, colored icons on a television screen. Matching the “notes” and rhythms causes the guitar, bass, or drum sounds from popular songs to play normally.

Hitting the wrong notes leads to gaps in the appropriate instrument track of the song. Singers simply match pitch and lyrics with the original song—the vocal portion of the game is essentially karaoke.

Lamb Hammer takes the Rock Band experience and brings it out into rock and roll venues, where it belongs. But there’s a big difference between a Lamb Hammer gig and a regular rock show: when we play, the audience plays, too.

That’s right. At this gig, YOU are in the band. Don’t worry if you don’t have musical talent: we don’t either. But we know that with a little bit of guidance, you’ll be cranking out sizzling riffs, laying down unstoppable beats, and wailing along with the rock gods. Please take a look around this site to familiarize yourself with the game and with the Lamb Hammer experience. You’ll find links to an article that explains Lamb Hammer and Rock Band in more depth, as well as videos from previous shows and a parody music video we created. 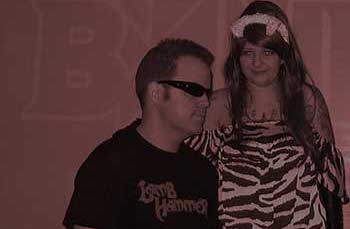 Finally, and most importantly, you’ll find the list of songs that you will have to choose from for our May 7th concert. Using the form on that page, let us know what song you want to reserve, and what position you would like (singer/guitarist/bassist/drummer) for that song. We’ll get you into the set list immediately.